This was a very busy day. We drove to Boston so Steffie could take a look at Emerson College. She was very favorably impressed.

I have a lot to say and a lot of photos to post. To do it justice, because I’m so tired right now, it will go up tomorrow. 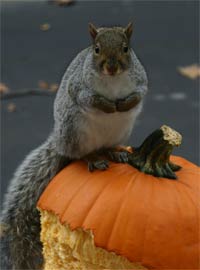 In the meantime, our pumpkin eating squirrel is still with us! We didn’t have the heart to remove his food supply, so it continues to sit on our top step.

A few updates. First, Helaine called me to the front window to let me know the squirrel has ended eating around the middle and has moved to a new area higher up. He continues to eat the meat without breaking through to the seeds.

Second, as you can see from the picture, he doesn’t mind posing. Sure, he’ll run away if I open the door, but tapping on the window glass doesn’t scare him away. He turned his head to me and just stared.

Third, he now has a name. Stefanie has christened him “Nutti.” Please note the hip and happening spelling, substituting an ‘i’ where a ‘y’ would normally sit.

Finally, as we were leaving today Helaine walked up to the pumpkin and turned it 180&#186, so the uneaten portion was facing the broad area of our front steps. When I asked her why, she said she was worried about the squirrel losing his balance as he went around the back to continue his feast. Helaine is much, much too considerate.