Over the years my traffic has gone up and down. It was highest just before I was struck by a hacker and lost my Google mojo.

Over the years traffic has gone up and down. It was highest just before I was struck by a hacker and lost my Google mojo. Google has reinstated me to their index, but the traffic has never quite recovered though it’s getting close, again.

All of these statistics are possible because of Google. There’s a little piece of code on every page which connects to Google Analytics. GA quantifies everything that’s going on.

There was a time I was making a few bucks a day&#185 from the blog. Now it’s a few pennies. That’s Google related too-Google AdSense.

Posting my blog entries to Twitter and Facebook has made a difference. I know most readers don’t read every entry I write, but from time-to-time there’s something that catches social networking eyes and traffic spikes.

The blog is read around-the-world though over 2/3 come from the United States. Foreign viewers tend to come for something specific, stop by and never return. Connecticut provides the most readers. As far as I remember I have never mentioned this blog on-the-air.

I was REALLY sick… doctor to your hotel room sick… and didn’t post October 22, 2006. That’s probably the last day I missed. An unwritten rule demands a post every day. Often there’s more than one.

Each entry is written and rewritten. Seriously, everything is rewritten. Mistakes still get in. Helaine is my best editor, though she continues to refuse my offer to let her make the corrections on her own.

Writing this blog is the most disciplined part of my life. Until I began I had no idea how much one could enjoy writing.

&#185 – Before you poo poo a few bucks a day, over the year it added up to hundreds of dollars, which paid for the web hosting with a little left over for coffee.

This has been going on for a while. Maybe they’ve heard of my fascination with Asian women and decided to do me one better. Nah. Probably not.

Oh Google, master of the universe, why do you puzzle me so? I am but a middle-aged boy from Connecticut who speaks English and English only. Yet my Gmail account, often as not, displays ads in Japanese.

“Ads are selected for relevance and served by Google computers using the same contextual advertising technology that powers our AdSense program. This technology enables Google to target dynamically changing content such as email or daily news stories.” 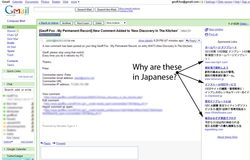 This has been going on for a while. Maybe they’ve heard of my fascination with Asian women and decided to do me one better. Nah. Probably not.

If you can figure out why Google thinks I’m turning Japanese, I’m really turning Jpaanese, they really think so, would you let me know?

You expect problems like these to follow hard and fast rules. What am I doing differently the fifth time I press retry than the fourth or third or second?

Don’t feel alone. I don’t understand what that error message is saying either. I’m just plagued with it!

It’s a tech problem at work. It’s an incompatibility between Firefox 3.0, Google’s encrypted sites (like Gmail, Adsense, Webmaster Tools, Google Docs, etc) and our Fortigate firewall. Intermittently my web requests to Google get rejected with error messages. It can take a half dozen retries before my Gmail is sent or other task completed.

It’s a strange problem because it’s both software related and intermittent. You expect problems like these to follow hard and fast rules. What am I doing differently the fifth time I press retry than the fourth or third or second?

There is very little about this online. I can find people with my problem. I find a smaller subset who’ve realized it’s this specific firewall box that’s the wild card. I can’t find anyone with concrete tips to make the problem go away!

It wasn’t this way until Firefox went from version 2 to 3. It only happens with Google’s SSL encrypted sites.

Helaine and I attempted to do our taxes yesterday. We’re about 95% of the way through the process. Part of what’s keeping us from completion is Google.

One of the tinier parts of my tax return relates to this site, geofffox.com! See those ads on the right side of the screen? I get money as people click them.

DON’T click them just to get me money. Please, don’t. Legitimate clicks are fine. I have no need or desire to scam the system.

Since I received cash, Google must send documentation to me and the IRS in the form of a 1099-misc. They did – twice!

With two 1099’s, the IRS thinks I earned twice as much as I did, which means twice the taxes (which I must pay, even on this income).

Google printed a phone number on the Form 1099-misc which I dialed. It’s not in service. They only printed the 1099-misc last week.

The ‘not in service’ voice invited me to press “0” if I needed to speak to the Google operator. I did, and then spent four quality minutes as she decided she had no clue who to send my call to.

Finally, she conjured up a name. My message to his voice mail politely asked him to call me, even if he isn’t the right person. Then I could at least know if anything was being done.

That was around seven hours ago.

You would think, with a problem like this, I should be able to use Google.com itself for the answer… you would think… incorrectly.

This evening, I found a place on Google’s AdSense site with an email link. I sent a note and immediately got a response that showed no one had looked at my question. Again, Google seems to be the place where this shouldn’t happen. Their machine intelligence should understand my query… you would think.

Thanks for your email regarding your tax information. We’ve provided some information below which we hope will address your question. As you know, you can also find instant answers to some of our top questions in the AdSense Help Center at www.google.com/support/adsense. If you still have unresolved questions after looking through this material, please reply to this email and we’ll be happy to help you further

I’ve now replied and am waiting. In the end, they very well may help me. I can’t imagine under what conditions they’ll be happy to do it.

If you’re in China, trying to find information that the government feels is inappropriate, too bad. Google won’t help.

I suppose it’s their prerogative as a commercial outfit. It’s the decision many company’s would make under similar circumstances. I’ve heard of media companies that provide ‘adult’ content here in the states, but tone it down in their Asian distributions.

In fact, Google has recently taken a stronger stand here in the United States, objecting to our government’s request for information on personal search requests. That’s laudable. It doesn’t take Google off the hook.

Companies often adapt their business practices to please the host country. And, there’s no getting around it, China is a huge host country with loads of profit potential.

Here’s why Google’s decision is so vexing to me. It has to do with their own corporate philosophy… their own declaration that they’re different. It’s number six of the “Ten things Google Has Found to be True.”

You can make money without doing evil.

Those are their words. I cut and pasted that right from Google’s corporate site.

Their site also used to ask:

Google does not censor results for any search term. The order and content of our results are completely automated; we do not manipulate our search results by hand. We believe strongly in allowing the democracy of the web to determine the inclusion and ranking of sites in our search results.

It doesn’t say that anymore. The page that held that info has been removed. I was able to retrieve a copy of what used to be there from Google’s own cache! I’m not sure how long that will be around before being revised, or deleted, which is why it’s a ‘picture’ of the page, rather than a link to what’s there at this moment.

This decision on Google’s part is evil. I can’t think of any other way to parse it. Google is subjugating their principles… my principles… in the pursuit of money. But it wouldn’t be the worst thing in the world if Google hadn’t have gone out of their way to claim they would never be ‘that’ kind of company.

There are many things, good and bad, this country can export. Freedom of information – the freedom to explore all ideas, is among our most precious and powerful. It’s so much better than exporting pop culture and fast food.

I have often heard an expression (which I will paraphrase here) that someone can be “F. U. Rich.” That means they’ve got enough money to do what they wish and not worry about the consequences. Isn’t Google in that position now? Don’t the Chinese need Google more than Google need the Chinese?

Where are Google’s principles?

Blogger’s note: Google provides the one source of income for this blog through its AdSense program. In essence, they pay my server costs. Google is also the largest source of traffic to this site.

Addendum – This entry was originally called “I’m Not Google… But If I Was.”

the header in your blog should be.. i