And you wondered how men and women are different. Wonder no more. 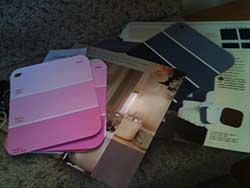 “Which one do you like?” Stef asked as I walked downstairs late this morning. I am smart enough to know this isn’t a question I should answer. She and Helaine were looking at paint samples for Stef’s California bedroom.

Without ever having been there they’re looking. The kitchen table was buckling under dozens of little samples.

And you wondered how men and women are different? Wonder no more.

Years ago my friend Jeff Lapides told me the story of his time as a clothing salesman. The best way to sell, he said, was to bring fewer not more suits! Too much choice equals no sale.

The colors have been whittled down. She’s leaning toward a shade called “Denim.”

There’s not a chance the room will be Denim.

Next Friday marks 21 years that Helaine and I have been married. I am the lucky one here – let there be no doubt.

As it turns out, we very nearly didn’t get married. This is not a story about the guy getting cold feet or anything like that. This is all about blood! In order to get married you take a blood test. Though it’s seldom discussed, the romantic reason is to make sure you have no sexually transmitted disease. Nice.

We were in Buffalo. We were excited. We were ready to get married. I had never given blood before. I’m not certain Helaine had either (though that certainly has changed, especially while she was pregnant with Stefanie).

Where does one go to get a blood test? We didn’t know, but our friend Jeff Lapides recommended his friend (and former high school classmate) Tommy Cumbo – by this time Dr. Cumbo.

It isn’t the fault of Dr. Cumbo or his office staff, but they couldn’t get blood from my quivering arm. I was so panic stricken it’s a wonder they got within ten feet of me!

Time was running out. The wedding was approaching. No test – no license.

Finally, with little time remaining, we went to the hospital and a phlebotomist (let’s see if that word makes it through the spell checker). This was a woman whose sole job was extracting blood. Dealing with little wimps like me was just a normal part of her day.

Amazingly, she did it. And it didn’t even hurt.

That last part is important, because it should have said to me, “Idiot, you need not fear this.” Good luck on that happening.

I didn’t need another blood test for years… decades actually. Unfortunately, as I got older, my current physician wisely thought it would be a good idea to check my cholesterol. After all my dad has had bypass surgery plus surgery on both coratid arteries because of a buildup of plaque. Even if it wasn’t hereditary, I ate the same food he ate for 18 years.

The test came back with bad news for me. My cholesterol was high. I don’t remember the numbers but they were enough to make those in the know go, “wow.”

There is good news too. Cholesterol can be controlled with drugs. I started taking Baycol (since recalled because it was killing people – oops) and now Lipitor. My cholesterol is within the reasonable range.

Unfortunately for me, there are risks with taking these ‘statin’ drugs. So, every six months I have to have more blood drawn. Tests are performed to make sure the Lipitor isn’t hurting me and to see where my cholesterol stands.

Every six months a blood test… and I still panic as if it were the first time.

Today was my day to go. I went to a huge medical building on Whitney Avenue in Hamden. Inside are dozens of doctor’s offices and the lab. From the outside, it looked as if they were passing things out for free because the place was jammed.

I didn’t wait long to see the phlebotomist. She remembered me from a prior trip and my anxiety.

I sit in the chair, try to clear everything from me mind and close my eyes tight. She told me to take a deep breath, but I couldn’t.

The last time it didn’t hurt at all. This time it stung and then burned. It wasn’t awful… but it isn’t the kind of thing I’d do as a hobby. Or, more to the point, there is little chance of me becoming an IV drug user anytime soon.

When I was done, I hugged the woman who had drawn the blood. She knew it was coming. It is somewhat symbolic, but it’s also an incredible release after all the tension and foolish anticipation I had built up inside of me.

Within the next day or two the doctor will call and tell me what’s good, bad and indifferent in my system. I will be safely away from having blood drawn for another six months.

When I go back, and I will, I’ll still be scared as if it were the first time. It seems so silly that I can’t place this little pain in its proper perspective. That’s what you get when you’re a wuss.