Back here in the family room I was crying like a little baby. OK, I’m a soft touch for crying, but this real story is a real tear jerker.

Helaine and I were watching Olympics coverage this afternoon when Tom Brokaw was brought on to introduce a feature piece about Gander, Newfoundland’s part on September 11, 2001. I already knew much of the story. Helaine hadn’t heard any of it.
From Gander Airport’s website:

On September 11, 2001, 39 heavy aircraft were diverted to Gander International Airport when airspace was closed in the United States because of tragic terrorist hijackings. Runway 13/31 was converted to a temporary aircraft parking ramp. The airport terminal was turned into an aid centre as food and clothing was distributed to stranded passengers. The airport and its surrounding community afterwards received high praise for their response to the tragedy.

The piece started slowly. At two minutes in it was obvious they’d buried the lede, until I realized this was no two or three minute piece. Brokaw and team had produced and NBC was showing a full length documentary!

It’s a shame to say if NBC had told its audience they were about to see a full length documentary they would have bailed in droves. They probably did anyway in which case they missed a truly wondrous story.

There are few superlatives to describe how kind and generous these Newfoundlanders² were. They opened their schools, homes, and wallets.

Back here in the family room I was crying like a little baby. OK, I’m a soft touch for crying, but this real story is a real tear jerker.

In the crush of news this 9/11 story was mainly lost. Without this Brokaw package it was destined to become more obscure. I was surprised at how many abandoned links I found while trying to find some interesting quotes for this entry.

Mostly the Twitteratti seem to agree with my assesment:

Thanks Rocco. There’s one in every crowd!

I agree with “porcupineridge.” Why can’t I find it online?

¹ – To say Gander is rural is an understatement! I landed there for refueliing on a westbound Overseas National Airways DC-8 transatlantic flight in the mid-70s. We flew in over a deep pine forest without seeing a sign of civilization. I figured we’d see the town on the way out, but again, nothing but pine trees until we were back over the Atlantic.

² – Originally this entry contained a less elegant nickname describing Newfoundlanders. Brian J. Mallard of Memorial University in St. John’s told me, “The majority of us do not like the term.”
My apologies to anyone offended. It was a poor attempt at showing affection.

In about an hour my birthday will be over. To celebrate Mother Nature has pulled out all the stops on a pretty radical thunderstorm. I’m hearing and seeing it out my window while following it closely on the radar.

It was a great birthday.

It actually started late yesterday evening when Stef asked if I wanted to go for some fast food?

This is un-Steffie like. She seldom ate fast food as a kid and certainly not now. I can guarantee when she asked she thought I’d say no… but I didn’t.

We popped the top on my car and set out for the other side of Hamden. Fast food is at least ten minutes away.

There was no way she’d ride in a convertible with NPR on the radio. She reached over, pushed a button and began to tune around looking for something modern and suitably auto-tuned to show youth was in control.

We got home just before midnight. At the very stroke Helaine appeared with my birthday cake. It was an oversized cupcake custom decorated by Cindy Turner at Cakeworks. She’s been in charge of our birthday cakes for close to two decades. She did not disappoint with icing so sweet it must violate some law!

Helaine and Stef had some cards and three sets of cuff links as gifts.

One was rectangular with colored stones. The second had speedometers on the face. The third was silver and shaped like Roxie, Stef’s new mini doxie puppy. Sweet.

My bigger birthday gift was still in boxes in the garage–a new PC awaiting assembly.

If my birthday ended right there I would have been quite happy. The three of us were together and obviously in a very good place with each other. I wouldn’t have believed that at 16 or even 26, but that’s the best gift.

Most of today was spent watching the Phils play. They blew out the Cards in Philadelphia. It was nice to have Stef around for most of the game. She has, for good or bad, become a fan who can get into a game and truly understand what’s going on.

Tonight the three of us headed to Lenny’s in Branford for my birthday dinner. Once Lenny’s was a lovable dump with excellent, fresh seafood. It’s not a dump anymore and though I was scared that would affect the food, it has not. 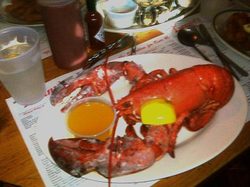 I treated myself to the “Shore Dinner” with a big lobster, steamers, a couple of clams, chowder and a slice of watermelon. Seriously, how can you go wrong with that?

Originally I was going to build my new computer today. That’s been put off. Not enough time.

I’d take that for my birthday every year.

By the time we’d seen the car it was too late. Had I been in my normal spot we’d be dead.

The title is serious. We almost got killed on I-91 just north of Hartford! I didn’t tell the story during our vacation because it was a little too spooky.

It was just before 5:00 AM last Saturday and we were northbound to Bradley. The road was dark. There was light traffic. I was doing around 70 mph. I’m usually a left lane driver, but was in the center as we passed the highway jumble that is Hartford.

I turned my head left and for less than a second watched a car approach and then pass me. He was in the northbound left lane but he was heading soutbound at a high rate of speed! We probably passed each other at 150 mph.

For a moment neither Helaine nor I could get the image out of our minds. By the time we’d seen the car it was too late. Had I been in my normal spot we’d be dead.

I grabbed her hand and we proceeded silently for a moment. Then I picked up my cell and dialed 911.

“He’s probably in Downtown Hartford by now,” I told the State Police dispatcher. I dialed our TV station’s newsroom next.

Jason, a producer, answered. “Call the State Police in a few minutes,” I said. “Check and see if anything happens.”

All we could do was hope the driver figured out what was going on and exited the highway. There was no reported accident.

The car wasn’t going fast or doing anything out of the ordinary when the back end sailed out to the left, the car skidded and then rolled onto its roof.

As part of her internship, Stef had business at my TV station today. I went too.

She was following me this misty morning as we entered the Route 40 connector from Whitney Avenue. The entrance ramp is on the right and you enter a sweeping, climbing, counterclockwise curve. In front of me was a small sedan.

The car wasn’t going fast or doing anything out of the ordinary when the back end sailed out to the left, the car skidded and then rolled onto its roof.

I just got this email from Debra Cumpstone.

You were behind my sister-in-law on the highway when she flipped her car. I just wanted to say thanks for calling it in. She is being checked out in the hospital for an egg on her head. They said she should be fine.

It’s tough to know what to do in a situation like that. I was certain the person in the car was injured… or worse. As I walked toward the car, I dialed 911. I was shaking so much it actually took three tries to put the digits together.

Yes, I watched it all unfold in front of me as if it was in slow motion.

If it’s any consolation to you and your family, she dd not seem to be speeding. I was astounded to see her car do what it did. I am not an automotive expert, but I suspect it was her car, and not her, that caused the accident. We’ll probably never know.

I made a conscious decision to call the police before I approached the car. My thought was, whoever was in the car was going to be really injured and the sooner the police/ambulance got there, the better we’d all be. When I called to her, she answered and then popped out. I put my arm around her to hold her close, because I was so scared and so happy.

My 21 year old daughter was in her car following me. As a dad, I’m glad she got this lesson in what to do, and saw this remarkable conclusion.

Please pass along my best to your family and tell your sister-in-law she’s a lucky girl.

I was not alone in pulling off the road and offering assistance. The three cars immediately following Stef pulled off too. Two people, I think they were tree trimmers, came forward and stayed with the woman in the crash when we left.

Recently, there’s been a news story reported (with gruesome video), of a Hartford man struck by a hit-and-run driver. Though the sidewalk was crowded with people, it was 90 seconds before anyone approached to offer assistance.

It’s not always that way. It wasn’t that way today in Hamden.