There are eight of us here in Las Vegas with the arrival of my sister and brother-in-law. We do lots of stuff on our own, and some things we do together. 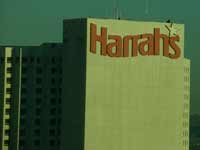 We thought it would be fun to do something together tonight, specifically go to the Improv at Harrah’s.

Everything went wrong. Even after it went right, it went wrong!

Helaine (Queen of Vegas) had found a BillHere.com, a website that specializes in half price coupons and tickets for Vegas shows. She had four coupons good for eight tickets to the Improv at Harrah’s.

We all walked across the street to Harrah’s then up the escalator to the box office. We walked up to Yoko who looked at the coupons and said, “I’ve been warned about these,” and refused to take them.

We wanted a manager to speak to, but she said no one would be there until 4:00 PM. I left my card and asked to be called. We headed back across the street.

Meanwhile, Helaine was quite upset. We checked BillHere.com’s website, and sure enough these coupons were still available from Bill. I sent him and email.

With no message from the manager at Harrah’s ticket office by 4:30, I headed back again. This time Stephanie, the manager was there. She too told me they wouldn’t accept the coupon.

I asked them to look at BillHere’s website. If they weren’t accepting these, I wanted them to force him to stop. It wasn’t fair to me or anyone else.

Meanwhile, while all this was going on, I got Bill on my cellphone (As it turns out, Bill too didn’t return my call). Bill said the folks at the box office were wrong, didn’t know what they were doing and should call Brooke in the production office.

The Harrah’s people didn’t want to have anything to do with Bill… or call Brooke.

Finally, after a long consultation with her boss, Stephanie accepted our coupons. This saved us about $100 on a $200 purchase.

Everything seemed fine until we got to the Improv. We sat at the side of the stage a few rows back. It’s not a very large place and the sight lines were fine. The sound was not!

From the time the emcee came on stage it was obvious the sound system wasn’t putting anything but bass in our section. We could hear some words, but often at the punchline we’d all be scrambling for a simultaneous English-to-English translation.

My mom and dad, sitting in front of all of us, understood nothing. Nothing!

It was very disappointing. I can’t believe the Improv or Harrah’s doesn’t know about this problem with the sound system.

We heard other people laughing. There must have been parts of the room that heard fine, but not us.

We came back to the Mirage. My sister and brother-in-law, still bushed from their flight, went to bed. The rest of us had a late dinner at the California Pizza Kitchen.

I had the five cheese and tomato pizza – excellent. Helaine had Split Pea Soup and Key Lime Pie. That’s an esoteric combo, but she said they were both great.

Before I leave for the night, a quick word about poker – awful. I did poorly this afternoon and it went downhill later tonight. It was only a late rush that kept me from being creamed.

This was a night when luck really entered in. I just didn’t have the cards. There was only one hand all night that I wish I’d have played differently. One hand would have been the difference between winning and losing!