I woke up this morning, turned on the TV and saw New Years celebrations from Australia. At the bottom of the screen it said, “Happy New Year Sydney.”

Sydney is about to leave. Amy is downstairs with Helaine and Steffie. Sad moment – what can I say?

I started to come downstairs, but Helaine asked me not to. I was in pajamas and looked like a guy who had been rearranged after a night of sleep. On the other hand, Amy’s married. How much better can her husband Rob look when he gets up?

I came downstairs and took two quick shots. As usual Sydney is in the energy preservation mode.

In a little while Sydney will get into the car and drive home to Fairfield County. Our dog sitting&#185 will be done. Sydney was a good house guest.

&#185 – Make no mistake about it, I didn’t lift a finger! Though Helaine provided the bulk of support for Sydney, Stefanie was very helpful (kudos to her). I was pleased to see Steffie often taking the lead with Sydney’s trips outside.

Helaine (and by proxy Steffie) treat all animals like children. And, if the animal should be doing something wrong, that animal will be told – no matter where or when.

Sydney began to lick her paws – a doggy sign of discomfort or irritation. Licking will only make the problem worse.

Helaine sat up in bad and began to talk to the dog. I was asleep when this began.

From then on, until I fell asleep again, Helaine was at the ready, giving Sydney the evil eye. Sydney quickly realized, as long as Helaine was awake, there would be no licking. All conversation stopped.

Today is Sydney’s last full day with us. Amy comes by tomorrow afternoon (hopefully for her, pre-snow) to pick the pup up.

Even with last night’s rude awakening, having Sydney with us has been our pleasure – really. It is true dogs give love and companionship unconditionally. Any time Sydney is in the room, it’s a warmer room.

Sydney is a good thing. We will miss her. I wonder if she gets on IM? 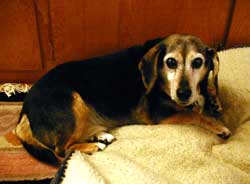 As I approached Sydney to take today’s picture, she was licking her paws. I would guess this is the dog equivalent of biting one’s nails. This is the only vaguely bad behavior I’ve seen from Sydney.

Has she been with us long enough for me to call her Syd?

When she heard me nearby she lifted her head and looked at me. That was the moment captured in this photo. It looks like she’s saying, “Enough with the pictures already.”

I did notice something I had noticed earlier with Ivy. Notice in the photo, only part of Sydney’s body is on the mattress. It’s not like she fell off – this is how she positioned herself.

For a human, wouldn’t this be incredibly uncomfortable? Dogs couldn’t give a damn. I wonder why? It can’t be as comfy as having your whole body on the mattress.

Sydney does another thing I noticed with Ivy. Because of the way her body is designed and articulated, she can lay flat, with her ‘chin’ flat on the surface.

It looks comfortable for her, but I couldn’t attempt it without going to Home Depot and installing hinges on my neck.

I wanted to take my daily photo of Sydney, so I moved behind her with my camera. Slowly, she turned her head to catch a glimpse of what was going on.

When she saw it was me, she began to run in my direction. OK, run is a bad characterization. She gently walked in my direction and climbed onto my pajama pant leg.

It’s possible her eyesight is so poor she just kept walking until she hit an uphill barrier? I’m more inclined to think she wanted the companionship… and the back rub that comes with dog/human contact.

It was an “ohhhhh” moment. You know, something so genuinely sweet you have to say “ohhhhh.”

Earlier this morning, my friend Wendie sent this:

The same sentiment has been passed along by a few other friends who’ve caught the photos. It’s just not so.

We loved Ivy more than you can imagine. And we loved having the companionship and love a dog brings. We just have no desire to take on the responsibility again.

It would be different if we could ‘institutionalize’ a dog so we could go on vacation or have a day in the city. We can’t.

So, we will continue in the ‘dog grandparent’ mode – taking in borders from time-to-time and loving every second.

&#185 – A fund is being established for Wendie and everyone else who is capital letter challenged. We can work to find a cure.

I went to search out Sydney for her daily beauty shot. I found her, but not in any of her normal spots.

Sydney was upstairs, behind closed doors, in Steffie’s playroom. They were both laying on the floor.

Sydney was on her mattress. Steffie was on the floor. Who is smarter?

Here’s the difference between Sydney and Ivy. Ivy would have been attentively watching TV with Steffie. Sydney, on the other hand, turned tail.

Since she arrived, Sydney has not barked. Not once. Maybe she’s capable, or possibly she knows it would expend too much energy?

This is not to say Sydney has been quiet. Yesterday, while napping in the family room, Sydney spent 15 minutes making a soft, low, deep murmuring sound – like a sea lion.

Helaine says Sydney snores&#185 too. I’ve yet to hear that.

Dogs don’t need a practical use to be an important part of a family. It is difficult to believe anyone could start a fight, or a war, with a dog like Sydney curled up next to them. She is a calming influence, even though she does nothing!

I’m not ready for the full time responsibility that comes with a dog. But, I’d be lying if I didn’t say having Sydney here has been good in every possible way.

&#185 – Helaine also says I snore. Obviously, that’s a figment of her imagination, as I would never snore.

Helaine has asked me to write something else about Sydney. She’d like to see something every day while we’re ‘sitting.’ My guess is, this is reassurance to Amy and Rob, who left Sydney in our hands.

So, I stared… and then I stared some more.

Sydney doesn’t get around much. If you’re waiting for Sydney to do something outlandishly cute – it’s not gonna happen.

I stared some more.

Mostly, while Sydney is prone, all her parts fall into place. She becomes aerodynamic in a quiet doggy kind of way. Tonight there was something different.

Sydney has huge ears! I’m not talking large. These babies are supersized!

In a strong wind, Sydney could give Sally Field (as the Flying Nun) a run for her money. She might have even climbed into the rarefied strata of “The Flying Dutchman,” the host of “Who Wants To Be A Millionaire” in Singapore. He very well might have the world’s largest ears (and hopefully, for him, best hearing).

Anyway, here’s Sydney’s daily entry and photo. All is well in this dog’s life.

I knew I was in trouble when both Helaine and Steffie asked why Sydney’s picture was not yet in the blog?  What was I waiting for – New Years?

Unlike most dogs, Sydney had no objection to wearing the hat.  In fact, Sydney hasn’t objected to anything yet.  She’s pretty content to sit or sleep and be oblivious to the world around her.  The only aggressive action she takes is to aggressively hint she might like part of her body rubbed.

Having Sydney in our house is the dog equivalent of having grandchildren.  We can have fun and play with her, but when it’s time for anything resembling responsibility, she gets shipped back home!

I came downstairs around noon today. It didn’t take more than a few seconds to realize who was in charge – Sydney, the visiting dog.

Sydney had gotten up from her bed (the first actual movement I have seen) and was walking over toward Helaine. The reaction from Helaine and Steffie was along the lines of what you’d expect just before an eruption of Mt. St. Helens.

Nowhere in the world does slow walking get as much scrutiny… and I’m including Tyra Banks and America’s Next Top Model!

Helaine has become Sydney’s spokesman. “She wants to be petted.” “Be gentle.”

As a cloud of dog fur fell off Sydney, I rubbed her back. I’ve never met a dog who didn’t crave this, including Sydney.

When next I caught sight of Sydney, she and Helaine were in the kitchen. Sydney was standing up, but Helaine was on her knees. I think this is also how it works when you meet the Queen.

Only two days here and Helaine was on the floor feeding Sydney piece-by-piece. Are we trained yet, or what?

When Amy returns, there’s a better than even chance Sydney will find a way to avoid detection… hiding in some hidden corner of the house. Even dogs don’t want to leave a vacation at the spa.

I was wrong. When I came home from work last night Sydney was not at the foot of the bed. She was at the side of the bed. One false step from Helaine in the middle of the night and… well, you can draw your own conclusions.

Normally, Helaine is in a placid deep sleep mode at that time, but she woke up enough to turn and tell me, “Sydney snores.” That will be two of us!

Sydney was one with the doggie bed. She was in the curled up doggie fetal position. She was motionless. I knelt down to touch her, the way a new parent sometimes touches their sleeping child – just to make sure things are as good as they look.

Sydney hadn’t been hungry earlier in the evening. Why should she? At her current level of daily physical activity one good meal would be enough for a month.

I didn’t get to bed until 3:30 AM. Both Helaine and Sydney were placid. If Sydney was a snorer, she was waiting long enough for me to pass out before starting. I did hear a few weak sighs as she shifted ever so slightly on the mattress.

I woke up long after Helaine, Sydney and Steffie. By that time Sydney had already missed another meal. There was medication to take, which Helaine wrapped in a piece of cheese.

Cheese seems to be Sydney’s Waterloo, because she sprung into action as if launched from a cannon. When Steffie had a piece of cheese too, Sydney pursued her, hoping some mystically fell off.

At one point Steffie decided Sydney needed to go outside. Though our lawn is still snow covered, and Sydney’s stems are short, there is one clear spot over the septic tank!

The Lord works in mysterious ways.

Other than that, Sydney’s been guarding the TV, lying on her rectangular bed. I haven’t heard her bark, even when the postman rang the bell and left a package at the door. She is curiosity challenged.

In short, she is nearly perfect – low maintenance, unobtrusive, cheap to feed. It’s good to have her visiting. I hope she’ll tell her friends.

How many times have we invited friends and family to go on vacation and leave their dog with us? Dozens, at least. No one ever takes us up on it.

Are we not dog friendly? Did Ivy leave some secretive expos